The new album from Georgia’s Horse, aka Texan songwriter Teresa Maidonado, is called Weather Codes and is released next week. It is perfectly described by Fire Records as “a study in heartbreak and loneliness set amidst the backdrop of the vast landscapes of American Southwest.” 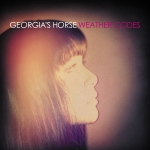 Descriptors such as haunting, enchanting and, indeed, heartbreaking occur often, but for Georgia’s Horse they are particularly apt. Her debut release The Mammoth Sessions was a triumph of eerie, gothic tinged, dark country and the follow up manages to raise the bar even higher. It is still a record for night owls certainly, the eeriness is still there, with a sorrowful melancholia never far from the surface either – the perfect accompaniment to drowning sorrows with a decent bottle of liquor.

Weather Codes is a record with its roots in the landscapes and stories of small-town Texas, where the inhabitants live out their hopes and fears and mistakes in perfectly judged vignettes of love, loss and despair.

Read on to discover where cod and lemon, Orson Welles and Angola Prison Spirituals fit into her 5:1 Interview.

One book you’d recommend to an alien:
The Elephant Vanishes – This was my first introduction to Haruki Murakami. I am forever indebted to Meti, my dear friend, for knowing me well enough to insist I read it.

Five bands (or albums) that have most influenced you?
That have influenced me?
Bauhaus
Marian Anderson
Angola Prison Spirituals
PJ Harvey
I See A Darkness by Bonnie ‘Prince’ Billy

One moment in time you’d like to have witnessed:
I have a deeper requested moment, but for the sake of keeping it short, I’ll confess this. I remember my dad telling us the story about the Orson Welles radio broadcast of War of The Worlds. Not that he was around then at that time either. It struck a chord with me because when I was younger, I had huge irrational fears of these types of things happening. Invasions. Not so much aliens. Just invasions in general. I wondered how it would feel to actually have heard that on the radio.

Five people (living or dead) you’d love to share a stage-jam with:
Freddie Mercury – if I only had to choose one, Mercury would be it
Edwyn Collins – realistically, if I only had to choose one, he is it
Hope Sandoval – like a rain drop from a sunny sky
Mick Collins – I would have so much fun playing with him. I mean really letting go.
Marian Anderson – Somewhere. Someday.

One biggest regret in your career (to date):
Not touring enough

Five things on your perfect rider:
Hmmmm…
A bottle of Jack Daniels
Loading in/out of absolutely all equipment. I hate this part.
A string quartet to soothe me before playing
Good hand soap and a lot of paper towels
Cod and a lot of lemons

One hour to live – who would you spend it with, and why?
I would most likely rather go alone. But I would want a small moment with my family and my love to say goodbye. To say that I’m sorry I have to leave. But then, yes, I’d rather be alone.

One song of yours that you’d most like to be played in 50 years time:
One Song…Mammoth. A cautionary tale for all the kiddies.

Check the side bar for our other 5:1 Interviews.