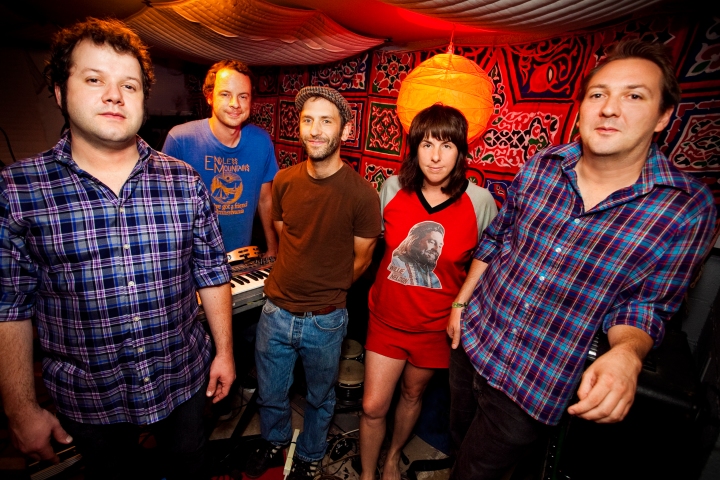 According to the excellent Allmusic website, “The Athens, Georgia based Elf Power emerged as part of the second wave of bands linked to the Elephant 6 Recording Company collective, a coterie of likeminded lo-fi indie groups — including the Apples (In Stereo), Neutral Milk Hotel, and the Olivia Tremor Control — who shared musicians, ideas, and sensibilities. Formed by singers/multi-instrumentalists Andrew Rieger and Laura Carter, Elf Power debuted in 1995 with the self-released Vainly Clutching at Phantom Limbs, followed a year later by the Winter Hawk EP, which heralded the additions of bassist Bryan Helium and drummer Aaron Wegelin.”

Now fifteen years later the band are just about to release their tenth album, the self-titled and quite superb Elf Power (out on the 14th September). Dedicated to the memory of close friend, collaborator and mentor Vic Chesnutt, it is a glorious mix of indie folk and psych-rock that stands head and shoulders above the norm for its beautiful and varied instrumentation and its thoughtful, poignant lyrical wordplay. It is a MM fave of 2010, so we were delighted when Andrew agreed to answer some questions about the band and the new record.

How did the name Elf Power originate?

I saw it etched into the concrete in downtown Athens,GA , but when I passed the spot a few days later it was no longer there. Perhaps it was a hallucination, or a  divine communication.

How did you get together? What inspired you to form the band back in the mid-nineties?

The band began as a recording project. When I first started writing songs, I recorded them on a 4 track cassette recorder, and eventually released the first album Vainly Clutching at Phantom Limbs for my own amusement. We pressed up some copies on vinyl, hand screen printed the covers, and gave them to friends. People liked the record, so I formed a live band to play the songs.

The band has been together about 15 years and this is your tenth studio album – that’s much more than most bands achieve. What is the secret to your longevity?

We try to approach writing and playing music differently, and we try different approaches to keep things fresh, such as collaborating with Vic Chesnutt on the album Dark Developments, or making the movie Major Organ and the Adding Machine, a surrealist children’s film directed by our drummer, Eric Harris, and starring me as Francisco, a good intentioned swashbuckler.

How do you create a song together – what happens to make a song appear?

Methods vary.  Sometimes I will write a song on acoustic guitar and bring it to the band to work up an arrangement, which is often much different from how I hear it in my head. Other times other band members write the music, and I write the vocal melody and lyrics. Sometimes someone will just introduce a fragment that turns into a full song, other times full songs will be written and then trashed only to have one part of the song reused in a different song.

The new self-titled album is (in our opinion) a superb record. How much did the sad passing of Vic Chesnutt influence the music?

Thank you. Vic died only a week before we began recording the album, so the songs were all written before he died. He was certainly on our minds throughout the recording.

If we had to sum the album up in one word, we might be tempted to use ‘eloquent’. How do you feel about that? And what one word would you use?

Eloquence is an admirable quality, sure why not?

Given you have been around a while, are there any recurring themes or topics to the music you write? How has your music evolved over time?

Death, life, dreams, love ,the human experience, you know the  shit everyone writes about. The early records were crude and primitive, and we’ve refined our approach over the years, but we still like to have a certain amount of sleaze seeping in.

What song(s) are you most proud of writing/recording?

I like them for different reasons, it’s impossible to pick one. I feel incredibly lucky that we got to record Dark Developments with Vic Chesnutt, as he has always been a musical hero to me.

Who are your greatest heroes / influences (musical or otherwise)?

Jandek for his mystery.

T. Rex for the smooth sleaze.

Royal Trux for the rough sleaze.

You can play with anyone live on stage (alive or dead) – who would it be and what venue would you play?

G.G. Allin, the notorious punk rock scumbag, just to experience the insanity, any shitty dive would do.

Men at Work Business As Usual was the first album i ever bought.I was 10 years old, and it was popular at the time. I put it on the other day and really still liked a lot of it. Great singing and lyrics. Their song Overkill is still one of my all time favorite songs.

What is/are your favourite records/songs of all time?

What are you currently listening to? Who would you recommend to Mad Mackerel today?

I like Tonetta a lot. He’s a mysterious Canadian man in his fifties or sixties, who has never performed a live show, but has been home recording bizarre songs since 1983 and creating strange videos of himself dancing to the songs, sometimes wearing strange masks or women’s clothing or very little clothing at all. The music is distorted, danceable, and very sexual in nature. His first album 777 was just released and it collects songs written from 1983-2009

Can you give us a 5 song playlist to make us smile or cry, but tell us which…

5.Guided by Voices Game of Pricks

What song would you have played at your funeral?

Probably just my friends chanting and wailing and beating on shit if they felt moved to do so.

Our very grateful thanks to Andrew for taking the time to talk to us and to answer our questions, and like we said, Elf Power is one heck of an album – well worth tracking down. You can pre-order it here or explore some back catalogue from eMusic here.