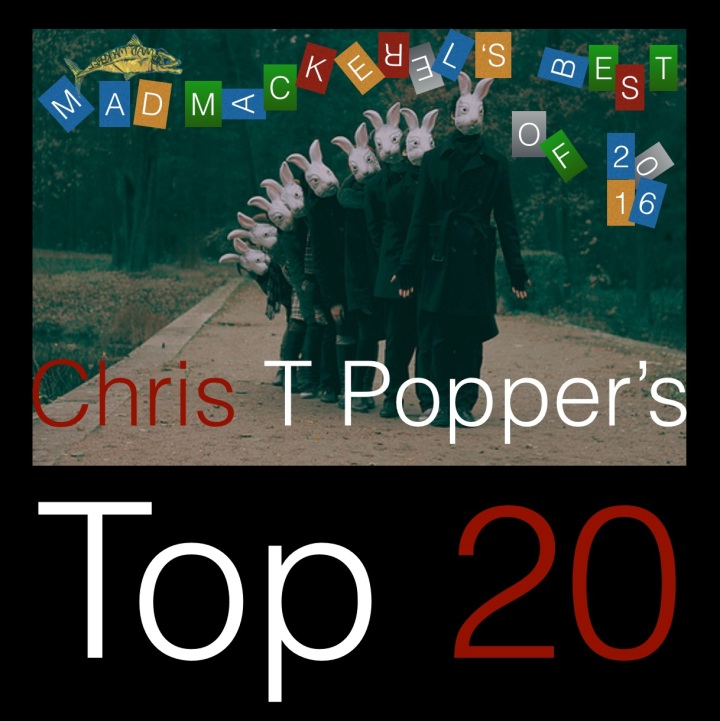 Our second individual listing comes from long-standing contributor Chris T Popper, he of the creaking joints and club foot (and yet still the second-best footballer in his family). Another cracking collection of tunes, and you can always listen on Spotify here.

To begin my countdown we have the troubled Neighbors. The band are new to me and unfortunately I won’t be getting to hear any new material as they split up earlier this year. Thankfully they did have the good sense to sign off with a cracker. Angel O with its spiky guitars, rhythm changes and Jose Diaz’s Rohena’s distorted vocal ending the song audibly weeping is definitely one to pique my interest in checking out their back catalogue.

Dust is everywhere – it’s all around you ‘you’re biting it now’ it taunts. Held together by a driving tempo that breaks occasionally for a trip around all kinds of added extras including traffic noise it’s a celebration of the mundane. Sweep.

The foreboding nature of the beat – a combination of tom tom through a whammy pedal – and lyrics feels particularly pertinent considering what a strange year’s 2016 has been. Decrying the US drone strikes ‘what’s he doing with that stick, which one is guilty?’ and ‘nobody asked us if we’re one of ‘them…’’ feels like a question likely to be repeated in 2017.

I love the weirdly tuned guitars, slacker attitude and the way it just does it’s thing almost unnoticed. There is a kind of warmth to the whole thing (it was recorded and produced by the band) that seems to permeate and the doleful tones of lead singer Gustaf Montelius are a perfect match to the fab wonky guitar.

Melbourne quartet Terry are a band made up of Australian post punk royalty. With members from different bands (including the wonderfully monikered Constant Mongrel) they’ve created an insanely catchy song with the sort of chorus that strikes earworm gold. Obviously I can’t help but sing along with it every time – it’s just instinctive.

This one ambles in to my top 5 with a nicely laid back swagger. Inspired by the disconnection of a society that’s seems intent on closing all our interesting places of social interaction, it’s a bluesy lament to those smoky pool halls now disappeared ‘your past gets closed down bit by bit’ says guitarist/vocalist and songwriter Dave Tattersall, adding (we’re now living)‘…in a bankrupt culture, one that celebrates bongo pop morons and largely ignores the real thing’. About right.

From humble beginnings it’s when the synth cracks in to life that I Exhale starts it’s inexorable rise to becoming my go to record of the year. How many times did I put this on really loud when I was feeling shitty and found Hyde’s spoken word lyrics carrying me off to a different place, ably assisted by that pounding hypnotic beat.

Little Barrie made an appearance in a previous top 10 of mine and they’ve delivered another beauty with I.5.C.A. Bit of a slow burner, but that filthy opening riff soon pulls you in and the guitar throughout is just extraordinary. Inspired by hallucinatory trips driving up and down Interstate 5 on their last tour goes some way to explaining it’s otherworldly appeal.

I have a real soft spot for Terry Malts, their tune I Was Not There was a big favourite from 2013. Now three years later they’re back with another cracker. I love the lyrics, grieving for a life that is just a nostalgic mirage. Do you want it back how it used to be? it asks before signing off with a ‘not me’ slapping any rose tinted glasses off your face in the process.

The chaos this song provides in just over 2 minutes is quite magnificent. The monster bass break preceding the chorus is proper badass and coupled with the strangulated vocals it gallops along with such an endearing lunacy I knew it was my favourite record of the year pretty quickly. There is something I love about a band doing exactly what they want… and it works a treat.