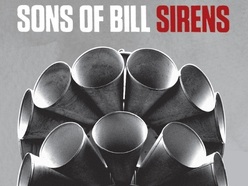 Virginia-based rock band Sons Of Bill have announced the release of their new album Sirens. Set for a March 27th release, this is a powerful collection of classic guitar-driven rock songs and reflective alt-country.

First taste comes with Santa Ana Winds, a haunting, earnest tale set to an anthemic fury of piano and power chords – it sounds like it probably has its own stool at the local bar.

In fact Sons of Bill is a band that sounds like where they’re from – somewhere south of Bruce Springsteen’s rock and roll desperation, but slightly north of their alt-country contemporaries.