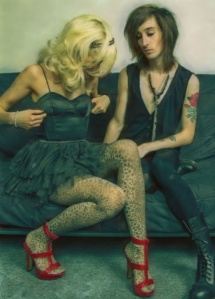 The two are influenced by a mutual love for political punk, glam, brit pop, and new wave.  If you’re a fan of The Jesus and Mary Chain, New Order, or Manic Street Preachers try Newchain below. It comes from planned release Killing Is Easy which gets a digital release in July and a physical release in September.

Visit their MySpace page here.
a
Visit their website here.
a
Download The Vicious Guns – Newchain mp3 (from Killing Is Easy)