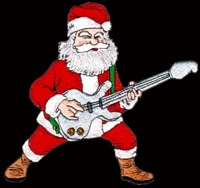 So ahead of our mammoth postings of end-of-year favourites: albums, tracks, covers, old songs heard for the first time in 2010 etc. etc. and posted by Mrs Mackerel, MM, Barry-Sean, Mr Popper, Dr Roddy, Polly Pocket et al here is a quick and dirty round-up of some of the new tunes, Christmas tunes, covers and other bits and pieces that have been doing the rounds.

We also have the lo-fi indie goodness of Summer Camp covering the 80s band The Waitresses, and some festive, fragile folk from Greater Pacific.

Download all below, but also take some time to check these out.

So please do dig deep and help someone get a bed and some food this Christmas by buying this single… It’s pretty easy to end up on your uppers, I’m not too far from it myself……….. also this is a damn fine song and if you don’t believe us have a listen! You can buy it here.

And lastly The Whites of our Eyes is the 7 minute long, improvised result of the first collaboration between Oxford / London kraut-jazz-drone experimentalists Braindead Collective (featuring members of Guillemots, The Epstein, Keyboard Choir and others), and the Scotland-via-Lancashire purveyor of lo-fi creaks and drones, Rob St.John.

Recorded on the coldest day of a freezing British winter in Oxford’s oldest church – St.Michael’s on Cornmarket St – by microphones strategically strewn from pews and rafters, it captures the sound of a band reshaping and remaking the song in response to each other’s improvisations. The result is a piece that teeters between a John Martyn or Smog-esq melody and the atonality and doomy drones of a Velvet Underground or Earth track.  Treading this line for 7 minutes, the song emerges refreshed on the repeated refrain of “You know I never came down from that tree”, backed by a chorus of voices echoing ever quieter into the icily empty church.

The single will be released on a pay-what-you-can basis, with all proceeds going to the homeless charity Shelter. Click here to download your copy.